The HCSO is very excited to have received this distinction. We look forward to sharing our model programs and policies for responding to individuals in mental and/or behavioral health crisis in patrol and in the jail.

(Photo at right: Deputy Brittany Ortiz, CORE Coordinator, with CORE clinicians from The Harris Center for Mental Health and IDD.) 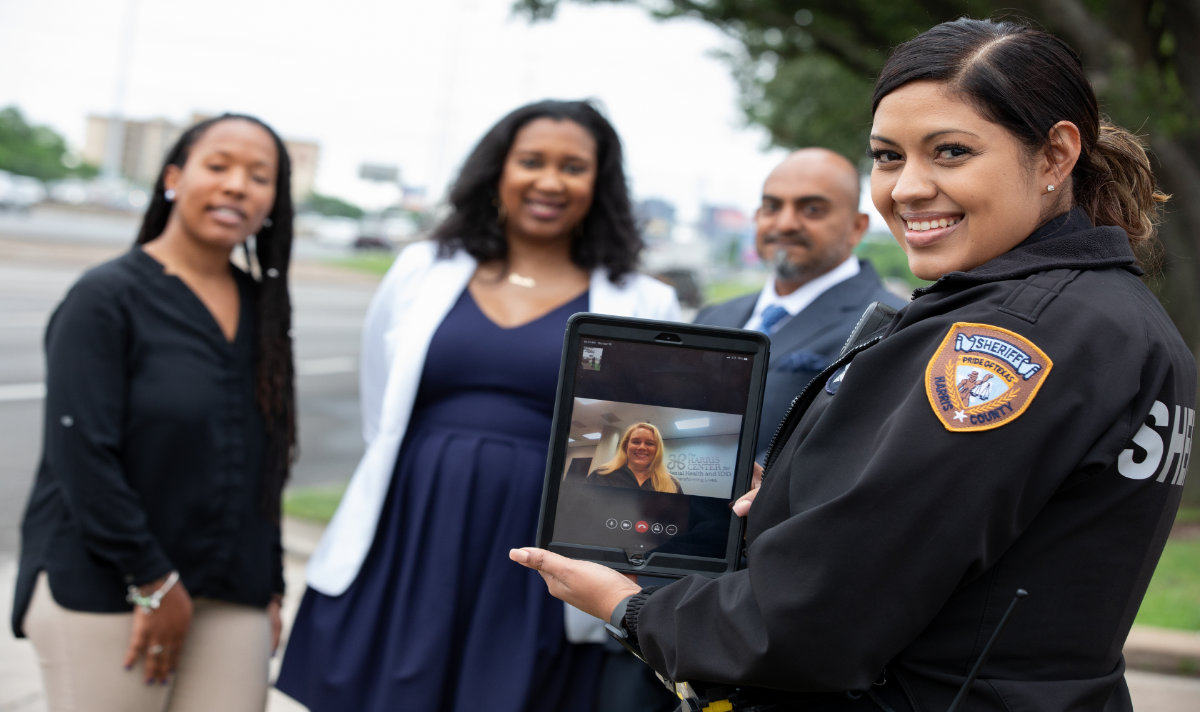 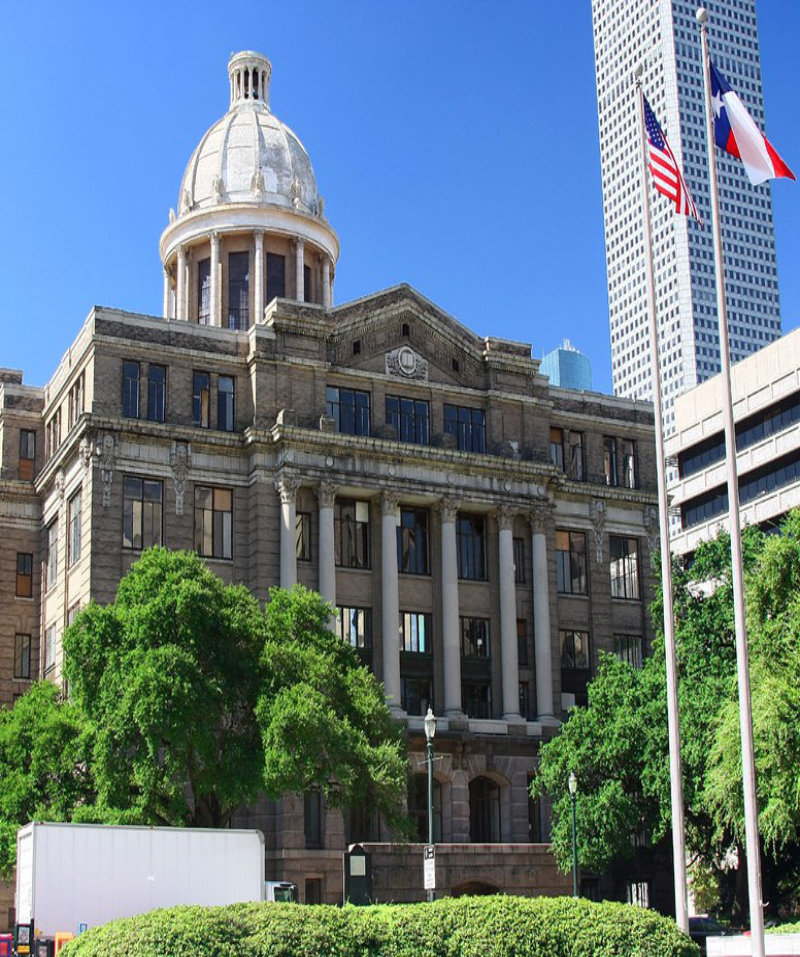 Harris County, with a population of 4.1 million, is the most populous county in Texas and the third most populous in the United States. It is one of the largest counties in the nation in landmass, encompassing 1788 square miles. Harris County includes 41 incorporated municipalities and is one of the most culturally diverse counties in the nation. At least 145 languages are spoken in Harris County and there are 49 consulates general, 28 consulates, and 2 representative offices in Houston. 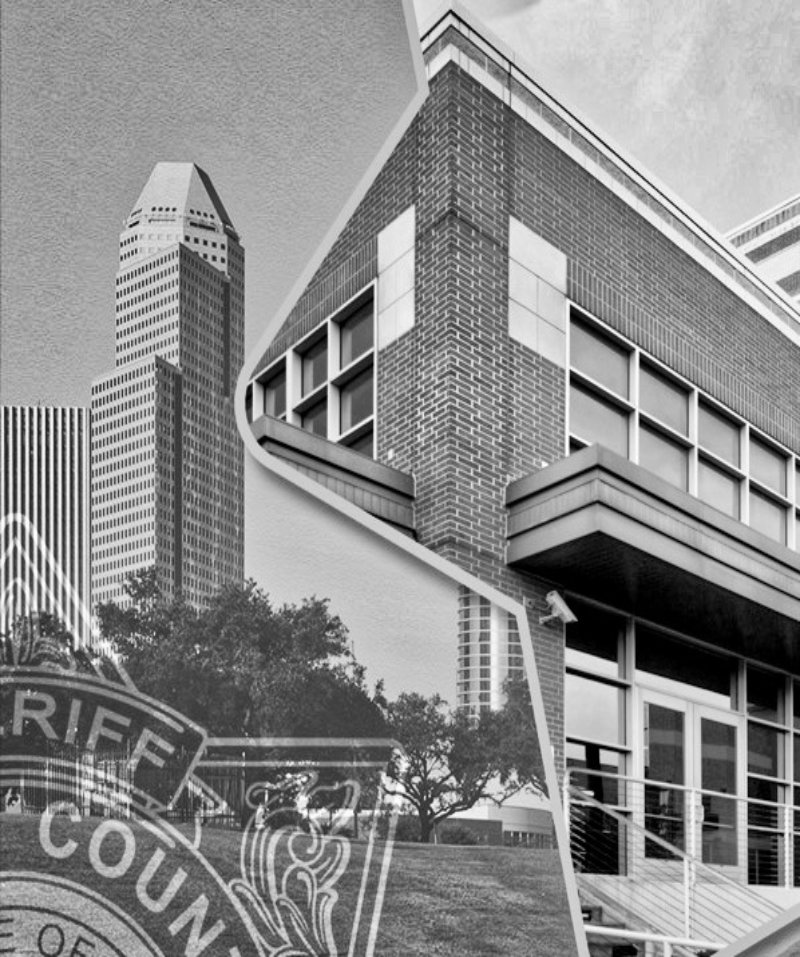 About the Harris County Sheriff's office

For the most seriously mentally ill inmates. The 108 beds are staffed by behavioral health and medical professionals. Services include case management and therapy.

A 284 bed unit for inmates requiring increased monitoring or who have chronic mental illnesses but who are not exhibiting acute symptoms.

A single point of contact for detainees with the objective of linking them with mental health services in the jail and in the community upon release.

The HCSO was one of the first sheriff's offices in the state to start a Vivitrol program. Vivitrol is a non-addictive, once-monthly opioid treatment.

For information on the jail program in the Harris  County Sheriff's Office contact:

The Judge Ed Emmett Mental Health Diversion Center (Jail Diversion Center) opened in September 2018. The facility is an integral part of Harris County's pre-charge jail diversion program. Offenders committing low-level, non-violent offenses when it is believed mental illness and/or psychosocial issues were a factor in the commission of the crime are diverted from jail to the Jail Diversion Center (JDC).

An example is a person who is homeless, suffers from mental illness, and stays in a building at night because he needs a place to sleep.

A study of the JDC conducted in 2020 found a 50% reduction in subsequent bookings after participants were diverted. Those with 5+ bookings were 3.1 times less likely to be booked into jail on a new offense than those not served at the JDC. For every $1 spent on diversion, the county avoided spending $5.54 on criminal justice costs.

Texas passed legislation in 2007 giving peace officers the authority to issue a citation for a narrow selection of  Class A and B misdemeanors rather than arresting the individual. The citation is an order to appear in court. The person is still held accountable for the crime. The program eliminates the arrest and short incarceration of the individual who would be out on bail in a day or two.

The program saves the county money, returns deputies to the field quicker, and eliminates the costly short-term incarceration of individuals innocent until proven guilty. The Houston Police Department, Harris County Sheriff's Office, and Pasadena Police Department issued the most citations in 2020.

"The only thing more expensive than education is ignorance." 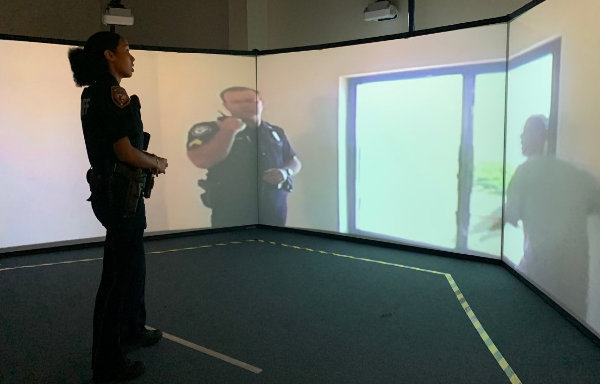 Chief Deputy Lee is a recognized national leader regarding law enforcement training and programs for responding to individuals with mental illness. He started working on this issue in 1998 as a sergeant in the Houston Police Department (HPD) where he started HPD's Mental Health Unit. As a lieutenant, he was the person responsible for implementing HPD's first Mental Health Division. Chief Deputy Lee developed and implemented many of HPD's Law Enforcement Mental Health programs. He is the author of several technical reports regarding law enforcement response to individuals with mental illness and has presented widely on the topic. He honorably retired from HPD as a captain in November 2016.

Chief Deputy Lee developed the first Mental Health and Jail Diversion Bureau in the Harris County Sheriff's Office as a major in January 2017. He is currently over the Law Enforcement Command which includes Special Projects.

Frank honorably retired from the Houston Police Department (HPD) as a senior police officer in March 2017. He served in the HPD for 36 years. Frank is the person most responsible for developing and implementing HPD's Crisis Intervention Team (CIT) Program and coordinated that program for five years.

He was selected by the Texas Commission on Law Enforcement as Discipline Chair of a statewide committee that developed a 24-hour mental health class for the Texas Basic Peace Officer Curriculum in 2005. He was also selected by the Bill Blackwood Law Enforcement Management Institute of Texas at Sam Houston State University to teach all Texas police chiefs a state-mandated 16-hour CIT class.

Frank has authored several articles on the topic of law enforcement response to individuals with mental illness and has presented widely on the topic.

Coalition for the Homeless